OeEB is committed to global gender equality, because the financial gap between women and men continues to exist: According to the Global Findex 2017, around 980 million women worldwide have no or limited access to financial services. Only around 65% of all women have a bank account and the funding gap in developing countries for micro, small and medium-sized women-owned businesses is estimated to be around USD 1.7 trillion. Equally drastic is the inequality in the distribution of work: According to the latest ILO data (2020), only 47% of all women have a job, compared to 74% of all men. At the same time, women continue to do most of the unpaid work such as the care of relatives.

OeEB has been contributing to economic development worldwide for more than ten years and aims to sustainably improve living conditions of people in developing and emerging countries. "Women are affected by several aspects of poverty – e.g. education, income or health – more than men," explains Michael Wancata, Member of OeEB's Executive Board. "This is why we have anchored promoting gender equality in developing countries as a cross-cutting issue in our strategy."

The first measures to implement this strategy were recently defined as part of a "Gender Action Plan". The aim is to structure all our business activities in such a way as to avoid discrimination and specifically empower women. The "gender lens investing" approach chosen for this involves integrating a gender analysis into the financial analysis in order to make better investment decisions and to support gender equality.

"Inequalities are particularly evident in poorer countries such as India", says OeEB board member Sabine Gaber. "Although India's economy is growing, only 26.1% of women – in comparison to 76.2% of men – were employed in 2018." By providing financing to microfinance institutions, OeEB contributes to strengthening women's participation in economic life and to improving women-owned businesses' access to loans.

"The greater involvement of women in economic life also brings many advantages - investing in women is therefore not only the right thing but also the smart thing to do," adds Sabine Gaber. "Studies show, for example, that women make the majority of household purchasing decisions and that women generally invest more in their families or in the local community, which has positive long-term development effects."

Gender lens investing is a comprehensive approach that takes into account the impact of investment decisions on gender equality. "Our aim is not only to incorporate a gender lens in our Environmental and Social Management System or to develop a gender-smart finance offering but also to improve gender awareness and capacity within OeEB", says Michael Wancata. 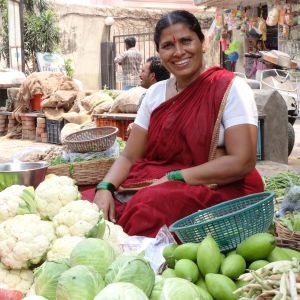 Our Gender Action Plan highlights some of the main challenges that women and girls around the world face and describes our approach and planned activities in order to contribute to tackling these issues.
Download